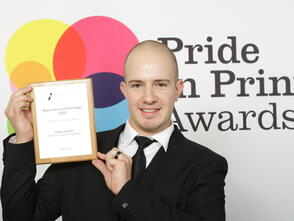 Regan was named the 2012 print industry Apprentice of the Year at the prestigious Pride In Print Awards on 3 May. The awards celebrate the best print work in New Zealand and the industry’s top apprentices.

Upon hearing his name called out, Regan stepped up to address the audience of 550 people at the TSB Arena. Regan acknowledged the support of his employers, family, PrintNZ Training, sponsor ICON Digital Printing Papers and the efforts of the other finalists.

Regan says he was overwhelmed to hear his name called out as Apprentice of the Year.

“If only my third form teacher could see me now,” he said.

Regan completed his screen printing apprenticeship at Commercial Signs Print & Plastic, in Tauranga last year. He was one of five finalists from a broad range of businesses vying for the top training award.

“This is one of the greatest experiences in my life, next to my wedding day. It was still sinking in the next day,” he says.

ICON spokesperson Lisa Hegh says they are delighted to be associated with the Apprentice of the Year Award, for the second year running.

“The finalists represent the future leaders of the industry and we are proud to be associated with them,” she says.

Communications and Media ITO general manager John Cudby commented on the exceptional calibre of the five finalists and the tough decision to choose a winner.

“Regan and the other award finalists have already achieved at the highest level with the backing of their employers, families and other supporters. We look forward to watching Regan and the other finalists’ progress – they have bright careers ahead of them,” he says.

John talked about the key role that formal training plays in helping companies to increase productivity and competitiveness in the marketplace. He urged companies to take full advantage of the Government’s $1000 subsidy for new apprentices signing into training, in what is a limited time offer.

“There has never been a better time to train,” he says.

The Apprentice of the Year finalists, who had each attended an interview for the top award, hailed from companies all over New Zealand. The finalists were: Regan Quaife of Commercial Signs Print & Plastic, Tauranga; Nicholas Gribble of Licensys NZ Holdings, Auckland; Michael Brown of APN Print, Tauranga; Conrad Vaney of MR Print Group, Hastings and Shane Baskiville of APN Print, Ellerslie.

Each finalist received an award and prize at the combined Apprentice Awards and PrintNZ Conference Opening Dinner on 2 May.

After leaving school early, Regan completed an auto services course where his tutor noticed Regan’s artistic skills and helped him land his first job as a t-shirt printer and sign writer.

Regan says: “Every day is different and every print is different. I am lucky where I work, as a screen printer in my workshop we get to print a very wide range of products – from signage, stickers and labels to white water rafting boat panels that get sent to places like America and Brazil.

“The apprenticeship has benefited me hugely, from my work ethic and skills right through to my reading, writing and spelling skills. I am a lot more confident in my work and have taken charge of the printing area in my workplace, which has resulted in me being promoted to production manager.”

Regan wants to keep learning and is keen to complete a digital printing apprenticeship through PrintNZ Training.

Regan and his wife are the proud parents of three children.

Brett Potter and Debbie Webster, directors of Commercial Signs Print & Plastic, say Regan has risen, in 10 years, from a non-qualified school leaver to a married man, father of three and an excellent screen printer.

“Regan is a devoted family man and a very valued employee. His work ethics and quality of work are exceptional. His attendance, initiative, devotion and enthusiasm to our company are above excellent”

Commercial Signs Print & Plastic has provided screen printing and signage to clients nationwide for more than 40 years. They produce a wide range of products in the screen printing, digital, signage and promotional industry with the latest digital machinery and screen printing equipment. 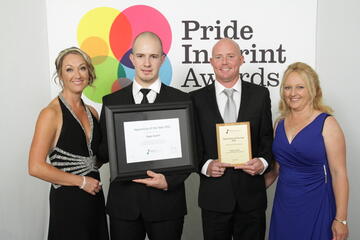